Christian Tragedy Is Impossible
Companion blog to “The Garden“

In our church’s study of John 18 we get to reflect on the last few hours of Jesus’ life.  This was a time of anguish.  He was seen as a threat to those in political and religious power.  He was arrested for crimes He hadn’t committed.  He faced an illegal trial when He had never committed any sin or injustice.  He was subsequently convicted and sentenced to a Roman crucifixion.[1]

Despite this awful trauma and injustice, we have to sum up Christ’s life and death, as did the authors of the Gospel, as an absolute triumph of the most epic of proportions.  There was no real tragedy here, and there is not tragedy in anything that a Christian suffers on this earth; because it all leads to becoming more like Christ.

Romans 8:28-29
And we know that for those who love God all things work together for good, for those who are called according to his purpose. For those whom he foreknew he also predestined to be conformed to the image of his Son, in order that he might be the firstborn among many brothers. 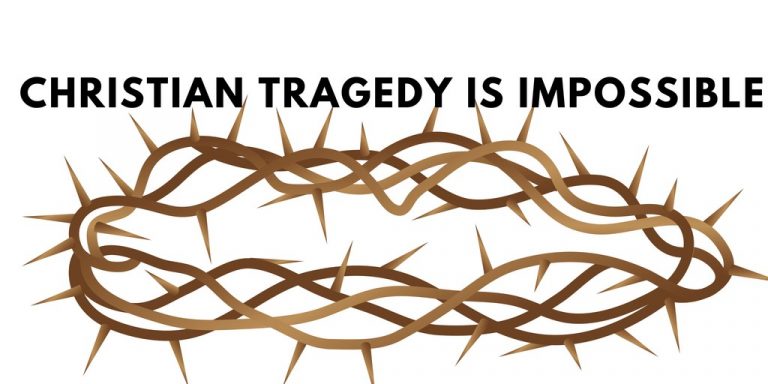 Well, if you are a true Christian, bound to become more like Christ so that our Holy Father can look upon you glorified, then YOU DID!  All tragedy and pain is for your good because there is a higher state of being other than earthly human happiness and safety.  That higher state is continual holy sanctification that can only be brought about by trials and weakness.

Tragedy is the triumph!

“Christ’s death was good. Thus, the true meaning of the phrase “triumph through tragedy” is not merely that tragedy is followed by triumph but, far more profoundly, that in the hands of God the tragedy actually becomes the triumph.  The apparent defeat becomes victory.”  – James Montgomery Boice[2]

Not only is apparent tragedy Jesus’ triumphant story, but it is also the basis and catalyst for so many Biblical stories.  Why would we ever think that God designs our lives in a less effective way?  Earthly safety and happiness for us is not God’s highest desire.  Heavenly safety and happiness is, and we are going to get there through hard-fought tragic-triumph.  He didn’t just tell us it was possible; He showed us the way.  We must suffer well!

Whoever heard of a triumph without a fight?  Adversity with Christ is always triumph because life isn’t over here.  This is just the warm up.  When life here hurts, call out and claim the victory of what is to come instead of lamenting this momentary life.

God knew you before the earth was formed.  He loved you enough to knit you together in a woman’s womb, to be born when and where He chose.  He foreknew the evil that would attempt to crush you and He continually uses those sanctifying pains for your good.  He could have stopped your earthly pain, as He could have Christ’s own, but there was something bigger to be had beyond the pain.

Acts 2:22-24
Men of Israel, hear these words: Jesus of Nazareth, a man attested to you by God with mighty works and wonders and signs that God did through him in your midst, as you yourselves know— this Jesus, delivered up according to the definite plan and foreknowledge of God, you crucified and killed by the hands of lawless men. God raised him up, loosing the pangs of death, because it was not possible for him to be held by it.

Just like Jesus, it is not possible for you who belong to Him to be held by earthly pain or death.  Therefore, Christian tragedy is impossible when everything is designed for a purpose.  And that purpose?  Your TRIUMPH!